The Wynntown Marshals: The End of the Golden Age. 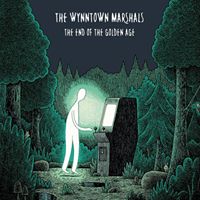 This is my first “Wynntown Marshals” album. Having seen them twice now I thought it was about time. The second time was Friday nights (June 12th) Voodoo Rooms launch gig for “The End of the Golden Age”, so it would’ve been rude not too. Besides having not just gone to see them again without being prompted, it fact I bought the ticket ages ago not long after this gig was announced with a certain amount of eager anticipation, album purchasing was as inevitable as the anorak purring as I listen while I type with the phones on. Or as inevitable as me now working my way through their back catalogue.
Which will mean their first recordings are next for me. I like to bookend an artists career like this sometimes, it brings perspective and gives a depth to a career you sometimes don’t appreciate the same way if you’ve followed someone from the get go. Like looking from the outside in and seeing the whole picture all at once. Like not having to wait for the gradual reveal of times curtains opening but seeing the whole story all in an instant. It’s a different kind of reward, though it does come with the poignant tinge of regret at not having discovered them sooner. Glad to have found them, but almost jealous of those who walked the road beside them.

Gig wise it was like the first time I saw them in the latter stages of last year. It took me a few songs to get into their sound but by gigs end I was one of the faithful. This is a band that knows how to pace a gig to perfection building to a climax that you didn’t feel coming. Older hands might’ve sensed it with eagerness but this Wynntown newbie was just taken on a tour through their world without knowing where the open top bus was going. I left the gig like a happy tourist in my own hometown. Like all the best nights there’s a sense of that deeper awakening on the journey home. When you’ve just seen a band you’ve really enjoyed your heads full of their sounds but your eyes are seeing with a grateful sharpness that’s not usual. I was still replaying in my minds eye their “LA Guns” jukebox tour when I got home. A great ‘short’ song for a second encore. Though nothing could top the last song of the gig proper. As I say, I’m new to them still so I don’t know titles or recognise the familiar. But this was an epic opus stretched over time and the senses with the kind of thunderous rock clout you’d not expect if all you’d heard was the current tours eponymous album. Without the boredom of autobiography, I’ve seen more gigs in the last year and a half than I ever have and this band just served up one of the very best of them. See them if you can.

Ah the album. Ah indeed, second time round now, which is nice. It’s squarely in the Alt.country camp, whatever the fuck that means these days. But they have the required amount of “No Depression” going on for that label to still be a relevant signpost on the road to Wynntown. “Moby Doll” is currently playing which aptly sums up the last sentence. You can just feel the heat coming off the dusty desert streets of Leith. And now straight into the title track with the jangly guitars so indicative of that sub-genre and the grungy “Seatte-lite” side of Alt;country’s nature.
Though the Wynnton Marshals do so with Uncle Tupelos melodically pleasing nature rather than a more Lambchop based misery guts cacophony, thankfully. Theirs is music to enjoy, to make you think (Moby Doll is a good example of that side of them) rather than to cut your wrists to. Though I can still hear Neil Young grimacing in places but that’s part of the depth in their sound.

They also have a sheen to them on record (well CD to be accurate) you might not expect if you only ever heard them live. Live they are there to entertain and they do so with gusto and self-deprecating appreciation for the position they’ve found themselves in. Though their clearly there as much through hard work as luck. On disc they’ve had the luxury of being able to polish their talent into a craft. The luxury of time a studio presents that a gig doesn’t has been put to good use. There are clear hints of a Steely Dan like sophistication in the mix at times too, though without the OCD perfectionism of Becker & Fagan. The opener “There Was a Time” and “Being Lazy” come to mind where I can hear this. Maybe it’s just a quality in the vocal. But I think “Aja” or “Pretzel Logic” is in at least one of their record collections.

“Wynntown Marshals” are an interesting listen. A band who have clearly worked to polish rough edges without removing them completely. “The End of the Golden Age” is the beginning of my listening experiences and I’m looking forward to exploring them further in the coming months.
Oh. How did I miss that muted trumpet in Moby Doll first time round?

The Buddha said there were four kinds of people. Those who run from dark to dark, those who run from light to dark, those who run from dark to light and those who run from light to light. From a life going from dark to dark to having a few years running from dark to light, with scuffed hands and knees from sometimes falling, I may be getting the hang of it now. How it began is not now how it is, I need a quiet space, After the noise of the day, So I take sanctuary in the creativity, And my soul feeds, On sometimes dark, Sometimes light fantasy, And I dare like many to work, But stay up off my knees, To dream, perchance to suffer, But always still to dream. Here are things mostly lyrical and poetic, with nonsense sometimes, reviews and personal musings. The coffees hot and always black. The words not necessarily so.
View all posts by Jim Laing →
This entry was posted in Albums, Gigs, Reviews and tagged album, Country, Edinburgh, gigs, music, The End of the Golden Age, Voodoo Rooms, Wynntown Marshals. Bookmark the permalink.