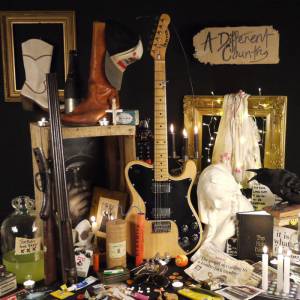 There’s one thing I hate about this album. There will be no new one to follow after it in a couple of years. When I discovered them last summer (in the “hey this is a great new band” sense) they had decided to call it a day when fate took songwriter and vocalist Jimi Ogden away to start a new life in Warsaw.

But its very existence is something to give thanks for (and there’s several previous ones to explore). This is an album of big Americana ambition fulfilled. There are no duffers here, no fillers and at times almost no time to breathe.

Opening with “Kite’s” suspenseful slow slow build up it explodes just after 3 minutes in, into a crashing crescendo of noise, then dips before it’s second coming just after 4 minutes to drag you screaming through to the tracks end. That’s screaming with joy by the way as you go with them willingly, all the way through this album. Track two “Hurricane” and four, “Get on with it” display a subtly done “pop-bluegrass” production reminiscent of the Bluebelles. “Money” brings in a definite “Alabama 3” flavour mixed in with echoes of “Floyds” pecuniary lament in the chanted chorus “Money, money, money is bad energy”.

Highlights are everywhere. “Hit me” with its insistent slow rocking centre sliding back to the Neil Young like vocal is a delight as is “No one’s there” with its haunted mournful guitar driven by the drums (for fans of Norwegian Alt- country this is very Helldorado, which is a very good thing indeed). This is a shit-kicking riot of an Americana album and if it didn’t make you smile, well, stop hanging around and haunting folk, its bad form be off to next realm with you.

Alan Gregson (producer of Cornershops albums) at West Orange studios and our bands hero Jimi Ogden in sharing production duties need to take a bow for letting things flow just so, while the art of the running order has not been completely lost.

To conclude, there are many influences to be heard throughout the album but the delightful, original creation this stew has given us is damned good fun. This is easily one of the best thing I will hear all year, hitting me with a similar force to Sturgill’s albums last year.

The Buddha said there were four kinds of people. Those who run from dark to dark, those who run from light to dark, those who run from dark to light and those who run from light to light. From a life going from dark to dark to having a few years running from dark to light, with scuffed hands and knees from sometimes falling, I may be getting the hang of it now. How it began is not now how it is, I need a quiet space, After the noise of the day, So I take sanctuary in the creativity, And my soul feeds, On sometimes dark, Sometimes light fantasy, And I dare like many to work, But stay up off my knees, To dream, perchance to suffer, But always still to dream. Here are things mostly lyrical and poetic, with nonsense sometimes, reviews and personal musings. The coffees hot and always black. The words not necessarily so.
View all posts by Jim Laing →
This entry was posted in Albums, Reviews and tagged A different country, Alan Gregson, Americana, Bluegrass, Cornershop, Country, The Lumberjack Cowboy Heartbreak Truckin co. Bookmark the permalink.