This “Edinburgh morning” actually concerns events from the afternoon on Saturday just past (21/04). I’ve fudged the timeline to fit the name of the series. I know it’s unforgivable. I claim artistic licence. There’s been a clutch of these come along together in the past week or two so I think a heading of their own on the menu is the way to go soon. 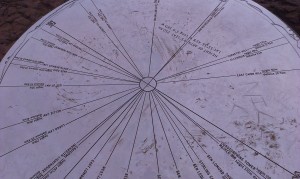 The days initial target, the peak of Arthur’s seat, would have shown us this metal disc which gives a line of sight to various landmarks.

It was a day made by the warm camaraderie of genuinely shared time. Comfortable and relaxed and unhurried it was as the best times spent with friends are. It was one of those rare times when I was appreciative of the moment as it happened.

What a great day it’s been,

Meeting up with an old friend,

For a walk round the park,

And while we didn’t make the peak,

Or get to sit on his seat,

We still had some good laughs,

But then came the time,

To say our goodbyes,

At this point then, I realised,

Our cup of affections never as full,

As the moment it’s emptied,

When finally both backs are turned,

And the joy of good company,

As with genuine smiles,

We go back to our own paths,

What a great day,

The Buddha said there were four kinds of people. Those who run from dark to dark, those who run from light to dark, those who run from dark to light and those who run from light to light. From a life going from dark to dark to having a few years running from dark to light, with scuffed hands and knees from sometimes falling, I may be getting the hang of it now. How it began is not now how it is, I need a quiet space, After the noise of the day, So I take sanctuary in the creativity, And my soul feeds, On sometimes dark, Sometimes light fantasy, And I dare like many to work, But stay up off my knees, To dream, perchance to suffer, But always still to dream. Here are things mostly lyrical and poetic, with nonsense sometimes, reviews and personal musings. The coffees hot and always black. The words not necessarily so.
View all posts by Jim Laing →
This entry was posted in Lyrics & poems and tagged Arthur's seat, Edinburgh, friendship, morning, poetry, Writing. Bookmark the permalink.